The 2021 competition had more participants and business plans than the previous year: here are all the interesting facts about the aspiring entrepreneurs who submitted an innovative idea or project.

The 17th edition of Start Cup Piemonte Valle d'Aosta, the competition dedicated to the entrepreneurs of tomorrow, has just ended: during the award ceremony of the best projects, held on the 5th November 2021 at the Politecnico di Torino, the winners of the various prizes and special mentions were announced.

We decided to share some interesting numbers about the participation in the competition in its two stages. This year there were about 400 participants who decided to put their innovative business project on the line, an increase of 14% on 2020, for a total of 120 Business Plans submitted. Let's see the data in more detail! 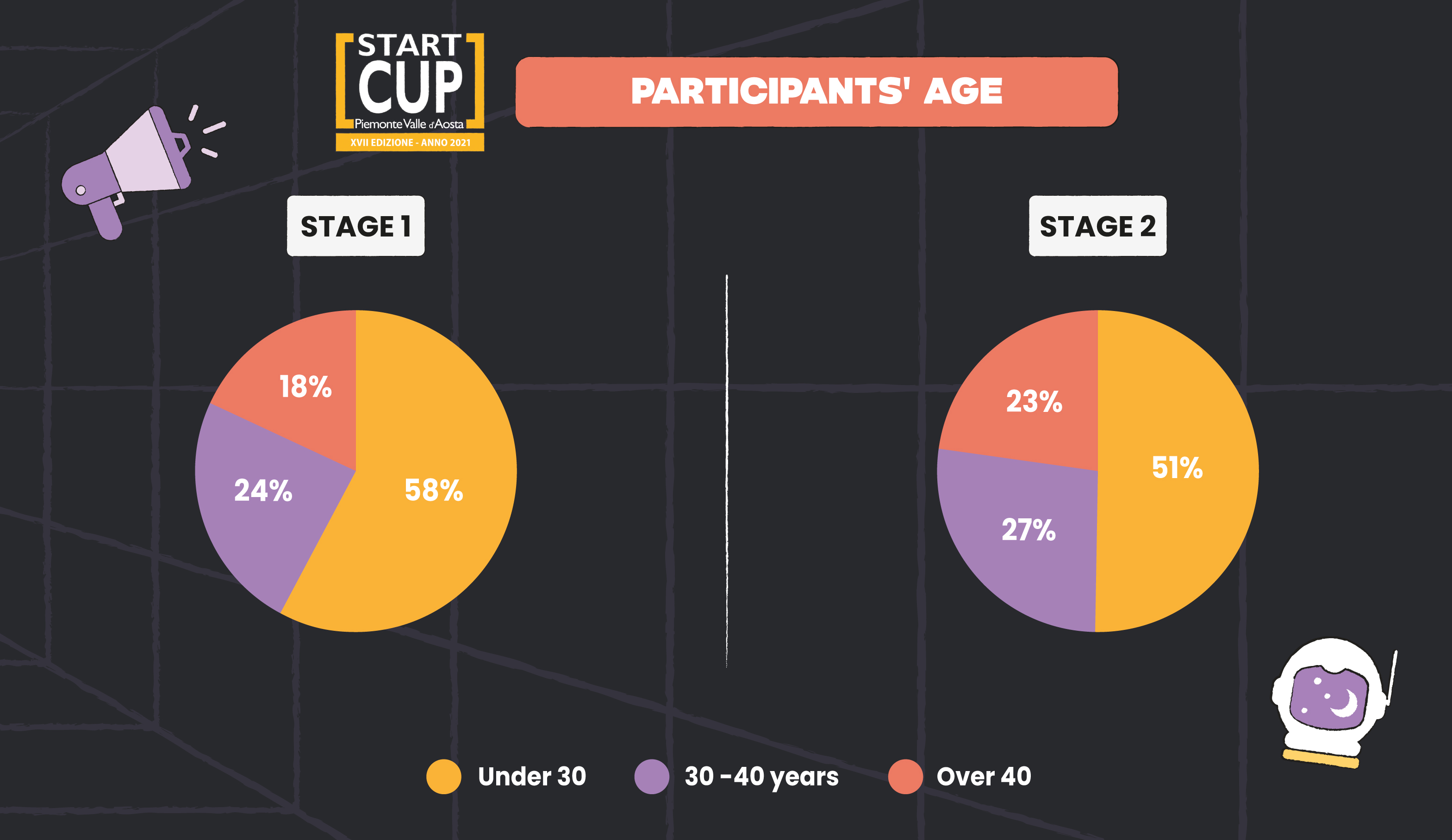 Analyzing the data relating to the age of participants in Stage 1, the "Ideas Competition", it is possible to observe that 58% belong to the category of under 30, 24% to that between 30 and 40 years and 18% to the over 40.

Even for Stage 2, the "Business Plan Competition", the majority of candidates are young or very young: 51% of the proposers belong to the under-30 category, which the initiative aims to raise awareness of entrepreneurial issues to encourage the birth of successful startups. Then, considering the smaller percentages, it emerges that 27% belong to the age group between 30 and 40, while 23% are over 40. 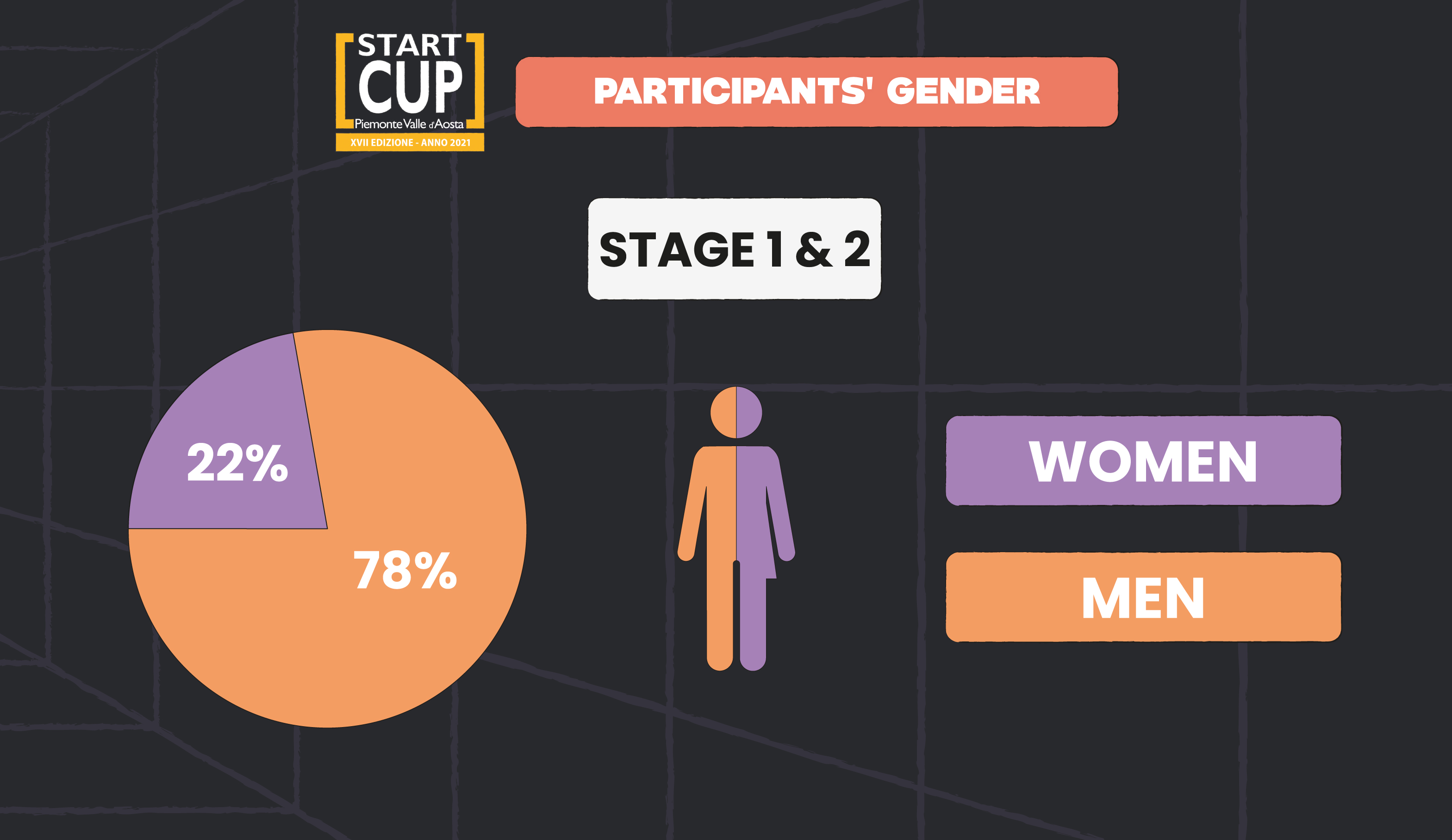 Examining the gender of the participants, it can be observed that the majority of the proposers are men (78%), a trend that was also confirmed in Stage 2 of the Competition. Female participation, however, grew by 4% compared to last year (18%), reaching 22%. We hope it will continue to increase in future editions! 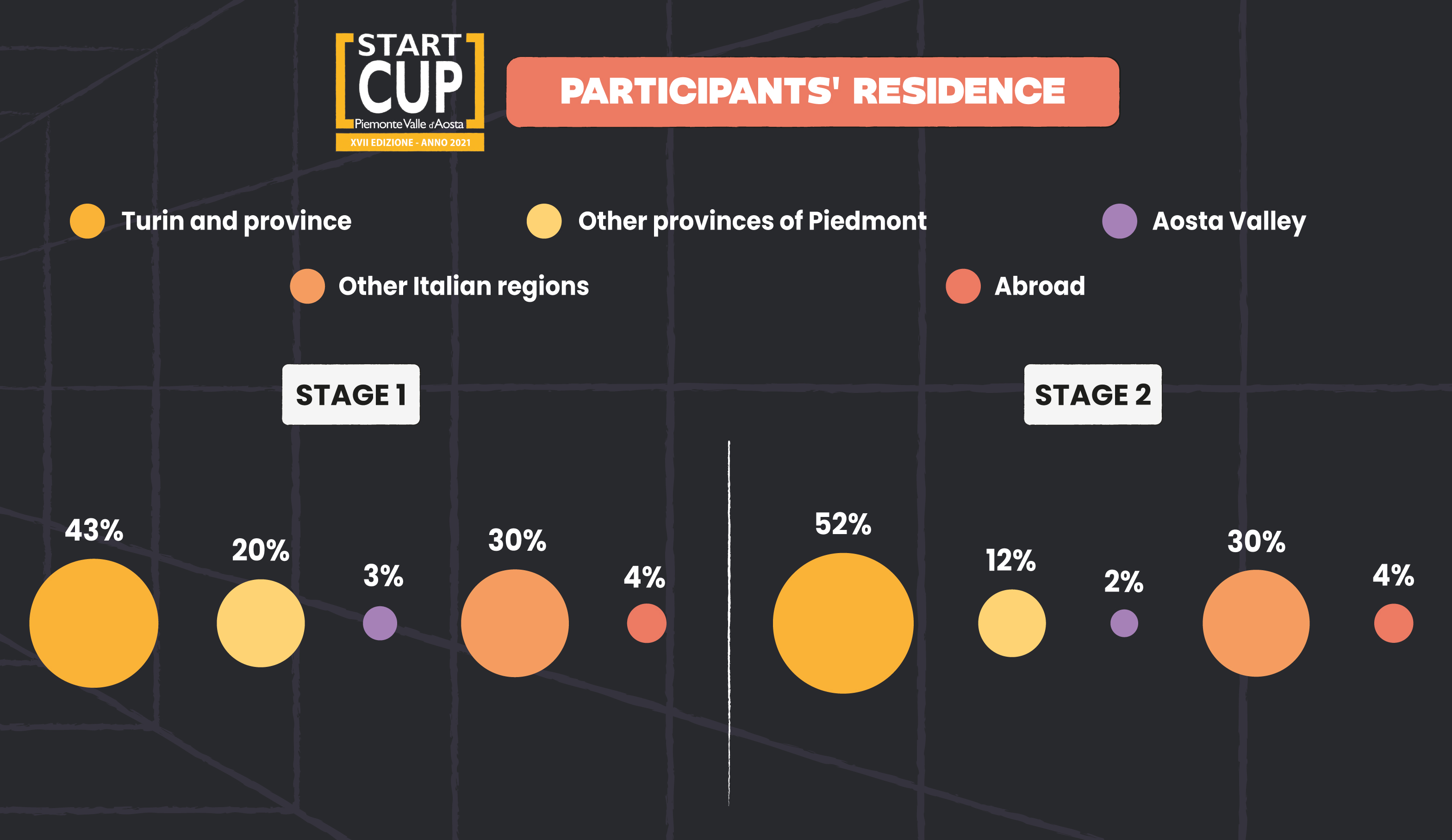 Referring to the regional origin of the applications, it is possible to note that during Stage 1, 43% of the business ideas came from the areas of Turin and province, 30% from other regions of Italy, 20% from other provinces of Piedmont, 4% from abroad and 3% from Valle d'Aosta. During Stage 2, the Business Plan Competition, there was a substantial increase in the number of applications from Turin and its province, reaching 52%, while for the other origins outside Piedmont the percentages remained almost unchanged. 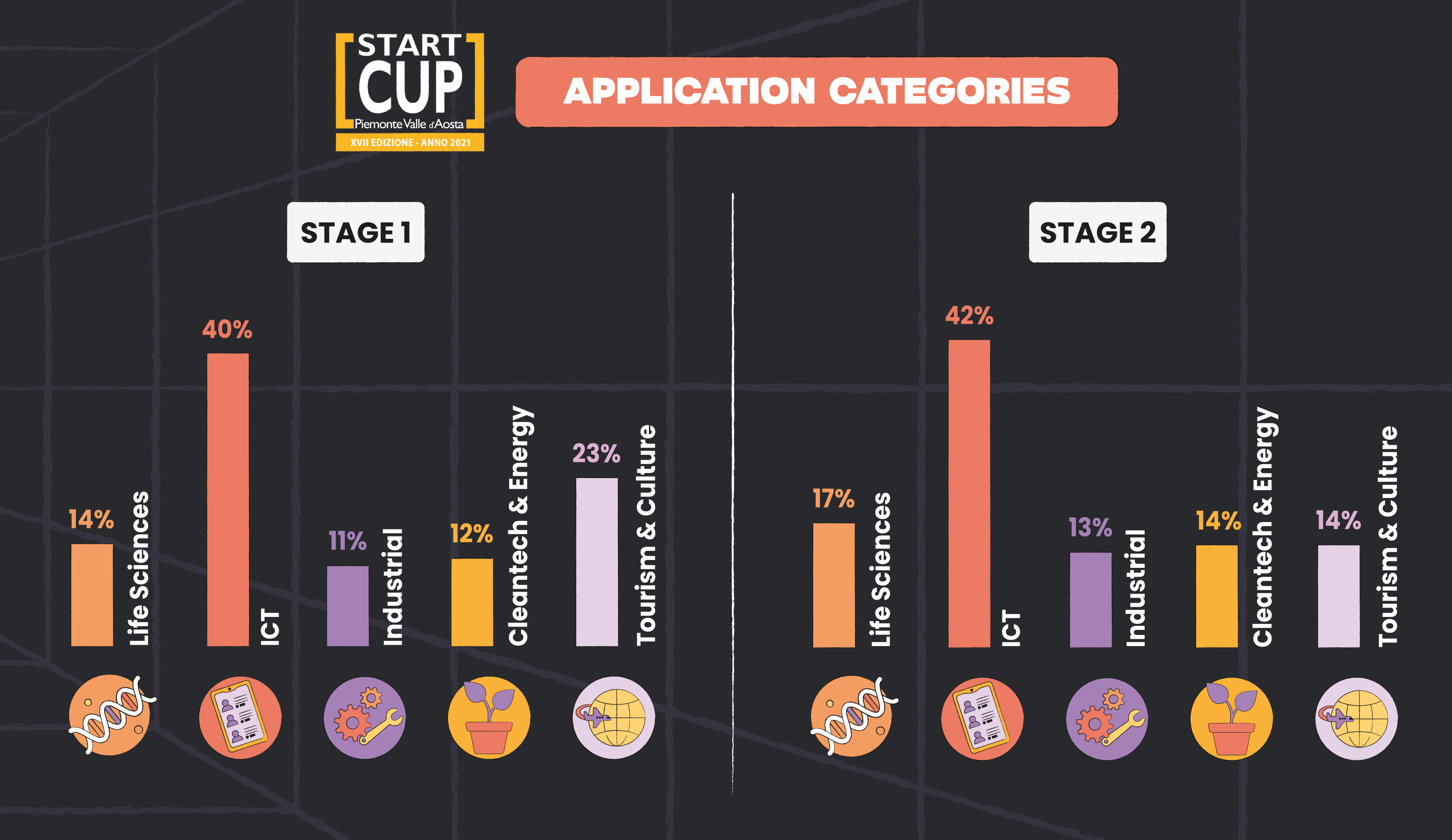 The sector in which the greatest number of innovative ideas and projects were submitted is ICT (Information and Communication Technology), which reached 40% during Stage 1 and 42% in Stage 2. Compared to last year, it is possible to highlight a positive trend, as the ideas submitted in this sector in 2020 were 39% in Stage 1, while the Business Plans were 40% in Stage 2.

With reference to this year's edition, during Stage 1 the 23% of candidate ideas belonged to the Tourism and Cultural and Creative Industries sector, followed by 14% in the Life Sciences sector, 12% in the Cleantech & Energy sector and finally, 11% in the Industrial sector. In Stage 2, the membership of the various sectors of the competition varied by a few percentage points, with a lower preponderance of business plans from the Tourism sector in favor of the other sectors.

Looking to the future

"The growing numbers of Start Cup Piemonte Valle d'Aosta 2021 are an important signal of restart and underline the dynamism of the local innovation system thanks also to the contribution of the universities, public university incubators and regional institutions," said the organizing committee of Start Cup Piemonte Valle d'Aosta, composed of the three Piedmontese incubators promoting the competition.

Waiting for the Italian National Award for Innovation (PNI) 2021, which will take place on Tuesday 30 November and Friday 3 December with the challenge between the innovative projects that have passed the selection of the regional Start Cups, we suggest you to subscribe to our newsletter through the form below and to follow us on the official social channels of the competition - Facebook, LinkedIn and Twitter - for all the next updates, or to participate in the next edition of the competition.

From idea to project: how to join the Business Plan Competition 2022

Stage 2 of the competition is now in progress: read the best practices for drafting a good Business Plan!

The site uses technical cookies, which are essential for the proper use of the site, and third-party analytical cookies, in order to improve site performance. If you accept or continue to browse the site, you consent to the use of cookies.