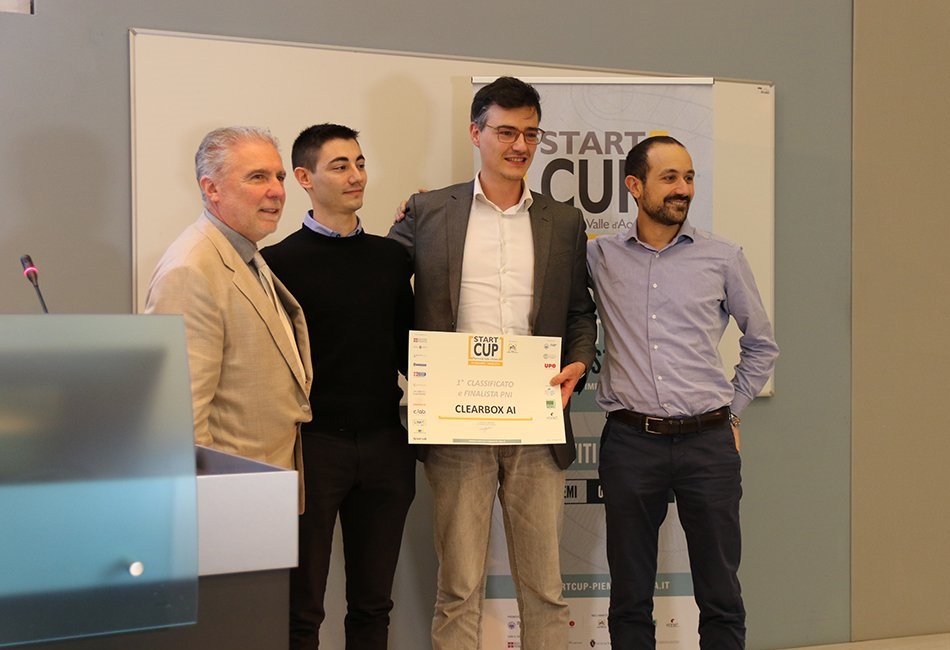 Analyze and redesign the complex and delicate relationship between humans and Artificial Intelligence, in order to create a synergy able to fully exploit the power of AI while also maintaining human control: this is the goal of ClearBox AI, the young company that won the XV edition of Start Cup Piemonte Valle d'Aosta 2019, an initiative promoted by the incubators I3P, 2i3T and Enne3 to support the birth of knowledge-intensive startups and promote the economic development of the territory.

The international team of the startup, composed also by Italian researchers that after experiences abroad have chosen to return to Italy to launch this entrepreneurial project, explained: "ClearBox's platform helps system users (operators, analysts, managers) to discover and intervene in cases of impartiality, inaccuracy or inefficiency of Machine Learning models. Being able to explain how ML models behave allows to build trust towards the system, to achieve compliance with the latest regulatory schemes and to make responsible, informed, non-discriminatory and justifiable decisions." ClearBox's project, incubated at I3P, won the €10,000 first prize of Start Cup Piemonte Valle d'Aosta 2019. Now the aim of the young company is to find opportunities to develop further Proofs-of-Concept with which to test its platform, to be launched with companies that use AI systems and intend to do so in a transparent, ethical, compliant way.

Usophy, a startup incubated at I3P, completes the podium: its project has been defined "the Netflix of university books", consisting in a digital platform that allows university students unlimited on-demand access to all academic texts through a monthly subscription. Usophy's project was awarded a cash prize of €5,000.

In fourth place, ex-aequo, were:

The first 6 overall winners also acquired the right to participate in PNI 2019, the National Award for Innovation (also known as the "cup of champions"), in which the winning business projects of the 17 regional Start Cups will compete. The appointment is for November 28 and 29, 2019 in Catania, Italy.

"The 15th edition has seen a significant increase in entrepreneurial projects compared to the last edition and the finalist projects have an excellent potential for growth in different technological areas," commented with satisfaction the organizing committee of Start Cup Piemonte Valle d'Aosta. "The participation of new sponsors and industrial and financial partners demonstrates the importance that the event has acquired over the years for the local ecosystem of innovation and entrepreneurship. In the process of valorization of new entrepreneurial projects, university incubators play a fundamental role also through their network of relationships with research centers, investors and industrial partners, with the intent to promote the economic development of the territory and create new jobs."

Learn more about the prizes and mentions of the 2019 edition!

From idea to project: how to join the Business Plan Competition 2022

Stage 2 of the competition is now in progress: read the best practices for drafting a good Business Plan!

The site uses technical cookies, which are essential for the proper use of the site, and third-party analytical cookies, in order to improve site performance. If you accept or continue to browse the site, you consent to the use of cookies.